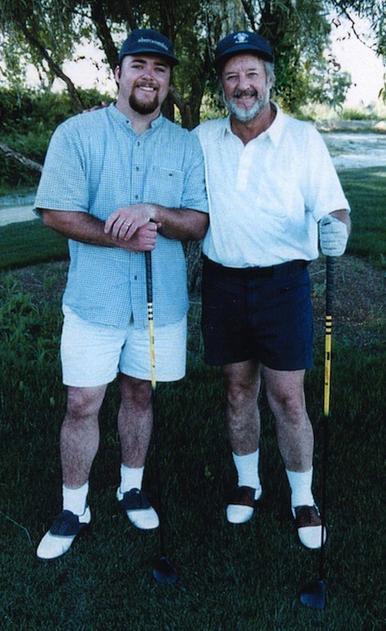 MAY 1996...During a 3-day Golf Fest, Sacramento Radio Station KHTK Sports Talk 1140 sponsored a long-putt contest featuring a grand prize of $5,000! The length of the putt: 114.0 feet...about one-third the length of a football field! Drove to the 'Fest'...left my putter in my car & walked quite a distance to observe the contest...the artificial putting surface was about 10 feet wide and elevated on the right side creating a break of about 6 feet, right-to-left! Not wanting to trek back to my car, I decided to borrow one of their 'loaner' putters. On my 3rd or 4th try, I was the first to ace their incredible 114-foot putt! Returned home...hearing about my long putt during dinner plus the mention of the $5,000.00 prize, my son Chris, a terrific golfer, was eager to compete. Headed to the Golf Fest the next morning...Chris also aced the long putt! Of course, using the method from my book! :-) After the first day, we were the first two contestants to ace the putt. Thought we may be splitting $5,000; however, in order to win the Grand Prize, one finalist would have to ace another 114 foot putt on the last day of the event. After hundreds of competitors, there were only 6 of us that aced the putt and each of us would have one attempt at acing another 114 foot putt. I wish I could tell you that one of us won the grand prize, but no one made the final ace...it was just a very difficult putt! What are the chances of a father and son being the first two contestants to 'Ace' the same 114-foot putt out of hundreds of contestants? We had the EDGE.....The Putting Edge!
Hmmm...wondering if our putt may have made the Guinness Book Of World Records in 1996!
---  Larry Stanley